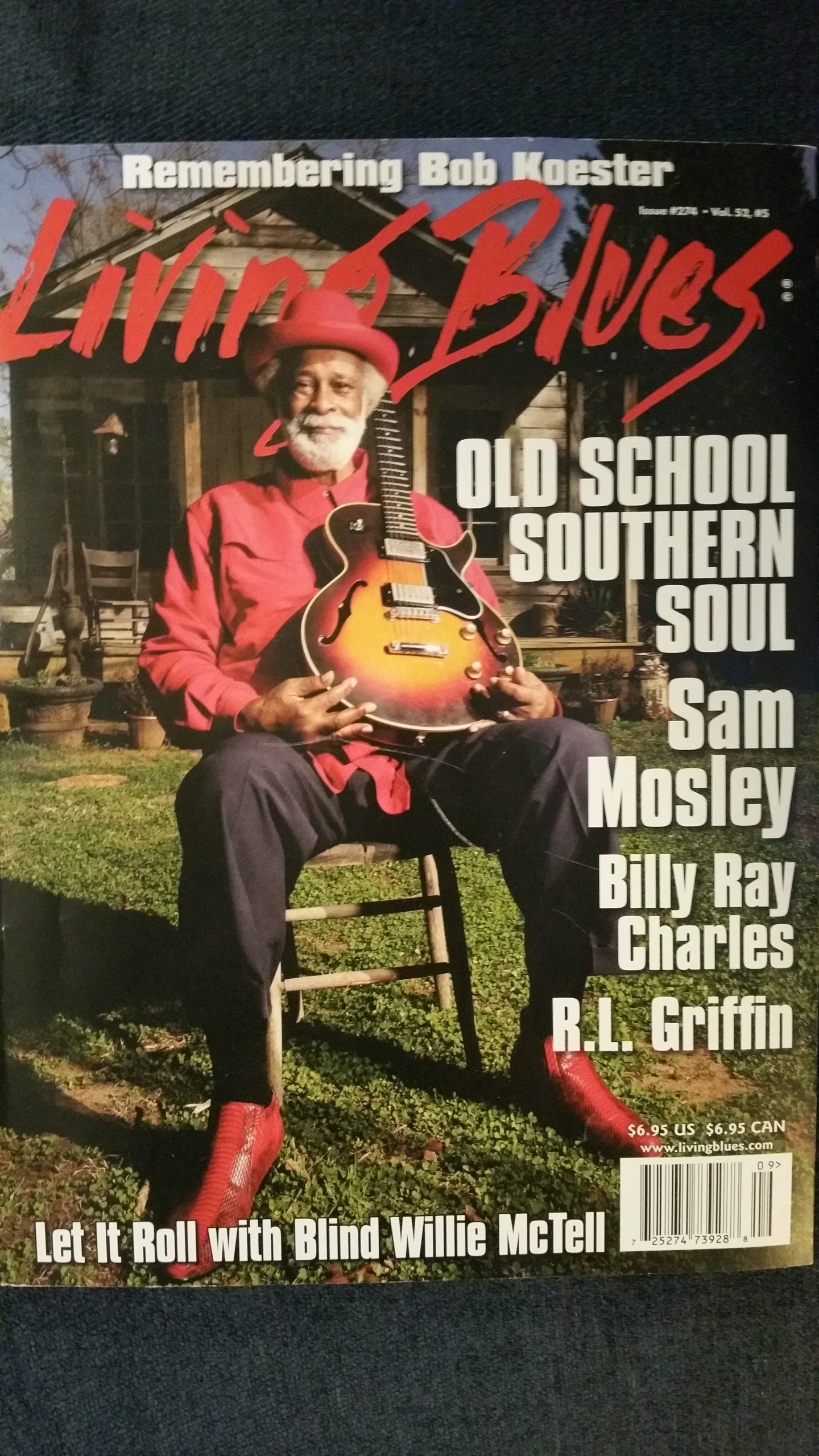 Erica was contacted by Living Blues Magazine Contributing Writer and Blues Legend Deitra Farr for an interview for a “Blues News: Artist to Artist” article for the September 2021 issue of the magazine. The Artist to Artist section spotlights Blues Women worldwide, and Erica is honored to be among that number! 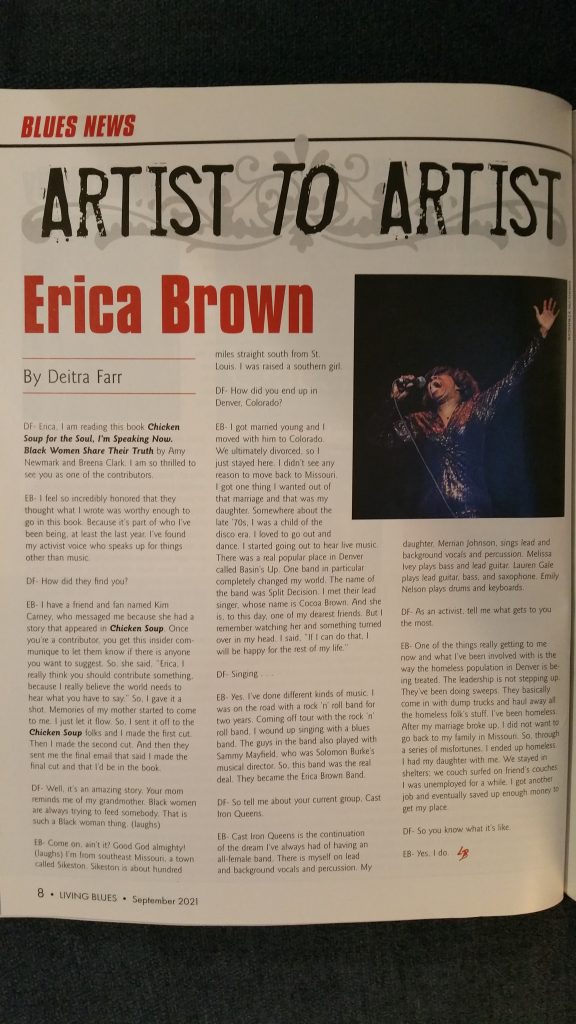 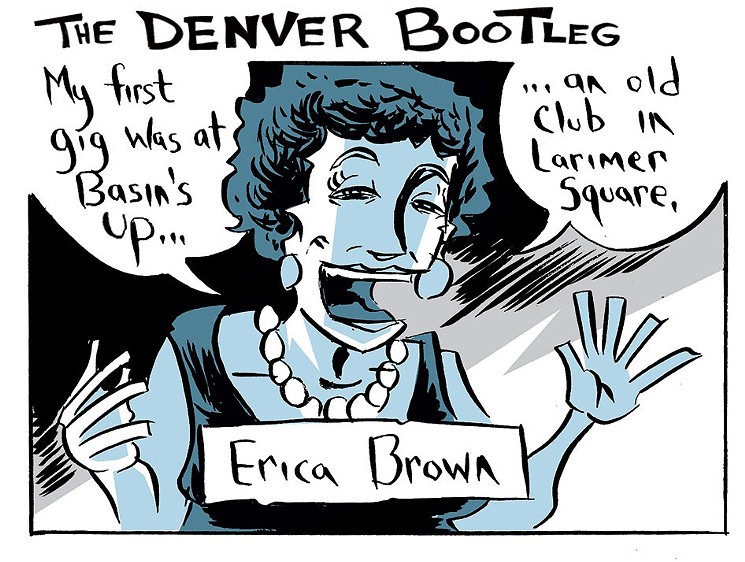 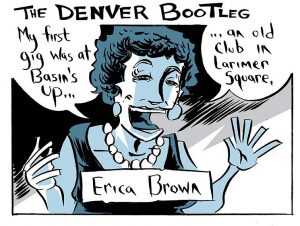 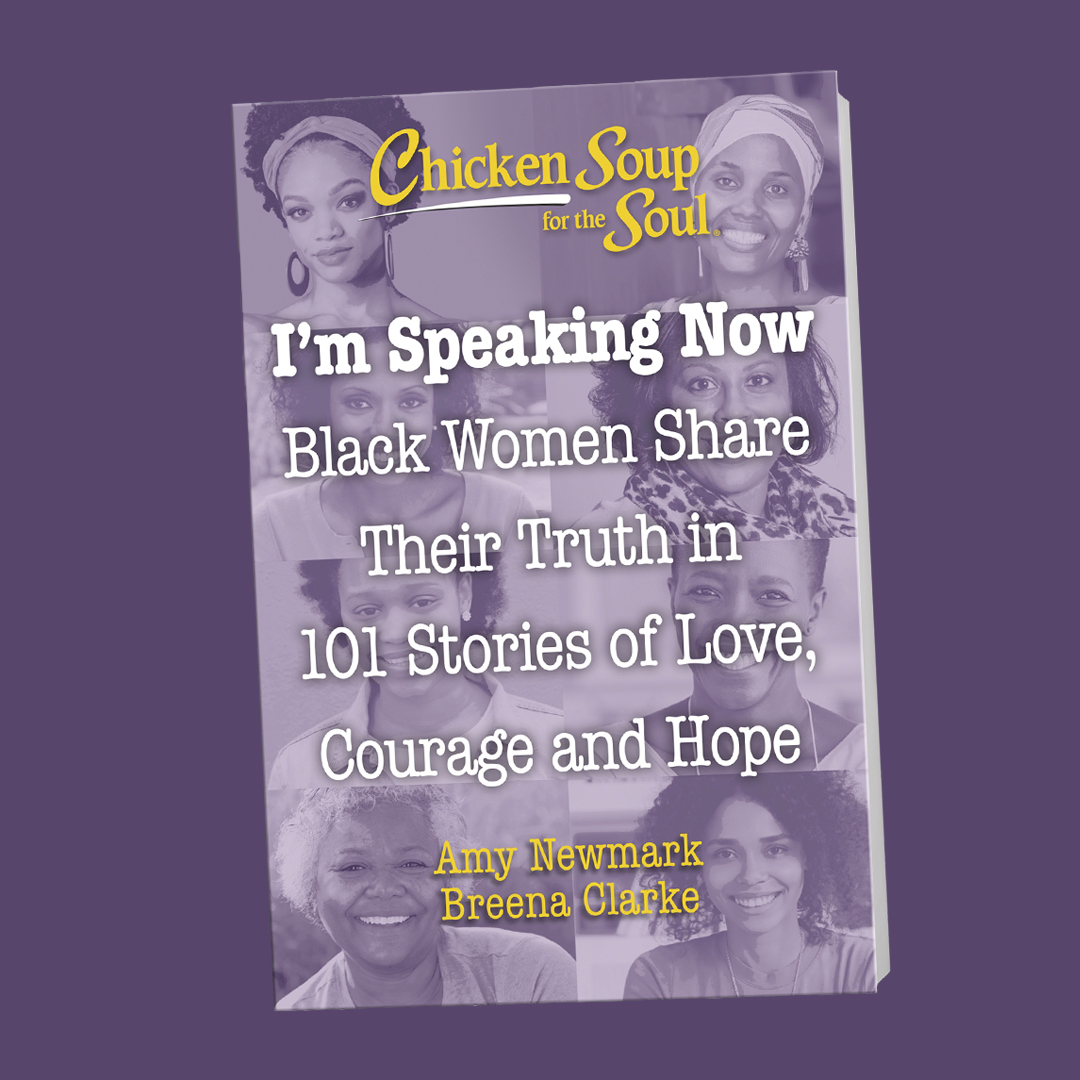 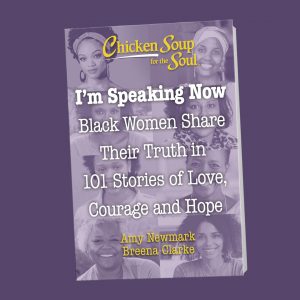 Erica Brown has been selected for a chapter in the newest Chicken Soup for the Soul Series, entitled “I’m Speaking Now: Black Women Share Their Truth in 101 Stories of Love, Courage and Hope”. Erica’s story was selected from thousands of entries, and she is thrilled to be included, and now a member of the Chicken Soup Family! The book will be on sale June 1, 2021 at bookstores nationwide, and at the Chicken Soup website, https://www.chickensoup.com

MEET ERICA BROWN
Erica Brown, who has been called “Colorado’s Queen of the Blues,” plays Nancy Foster, mother of a Denver military veteran struggling with Post-Traumatic Stress Disorder (PTSD) in the new play Honorable Disorder. This is the inaugural production by the new Emancipation Theater Company, and is being hosted at the Cleo Parker Robinson Dance Theatre. Brown, namesake of the former Erica Brown Band, has worked with some of the finest artists in the world, including B.B. King, Al Green, Delbert McClinton, Tab Benoit, Kenny Neal and, most recently, Todd Park Mohr of Big Head Todd and the Monsters. 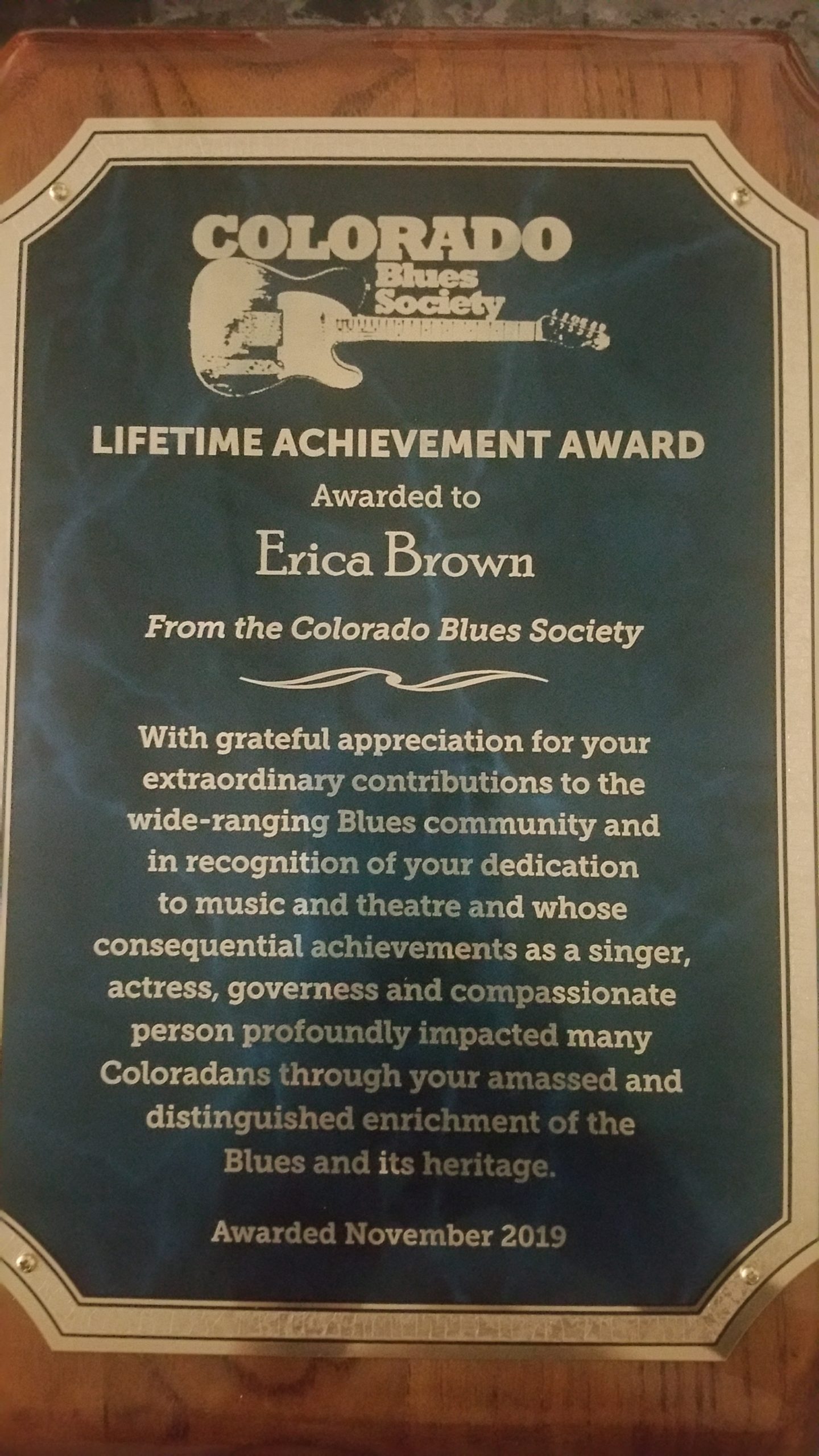 Erica Brown was recently bestowed the Colorado Blues Society’s Lifetime Achievement Award for her significant contributions and dedication to the Blues! Please see the attached photo for the full text of the Award and accompanying Proclamation! 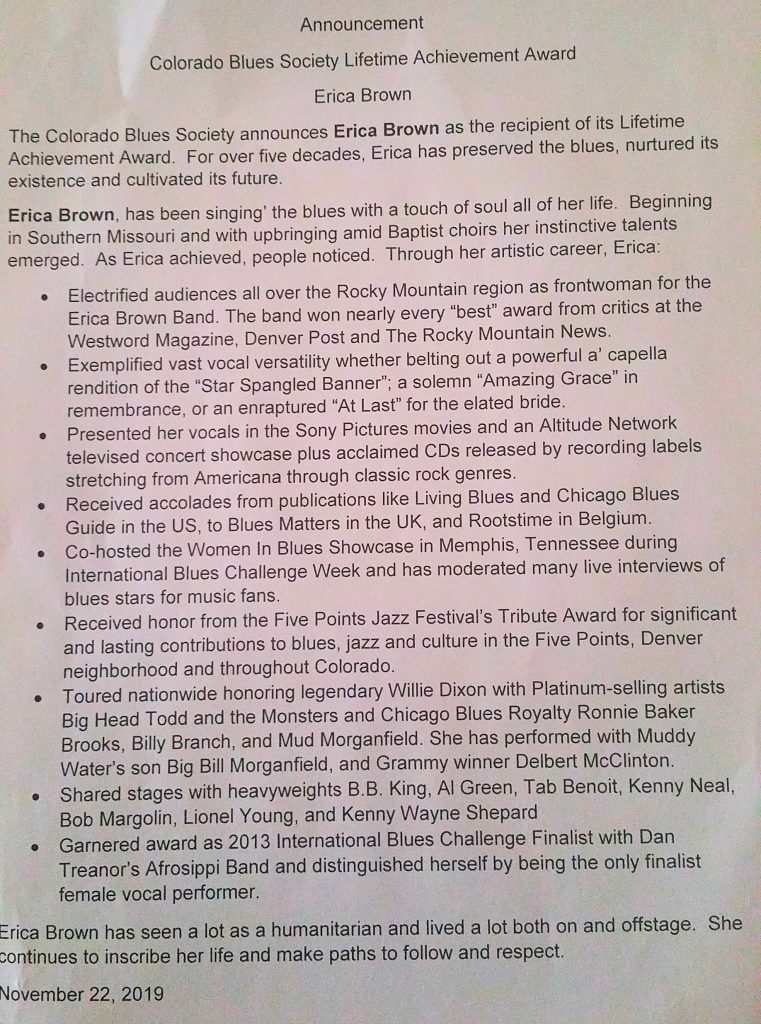 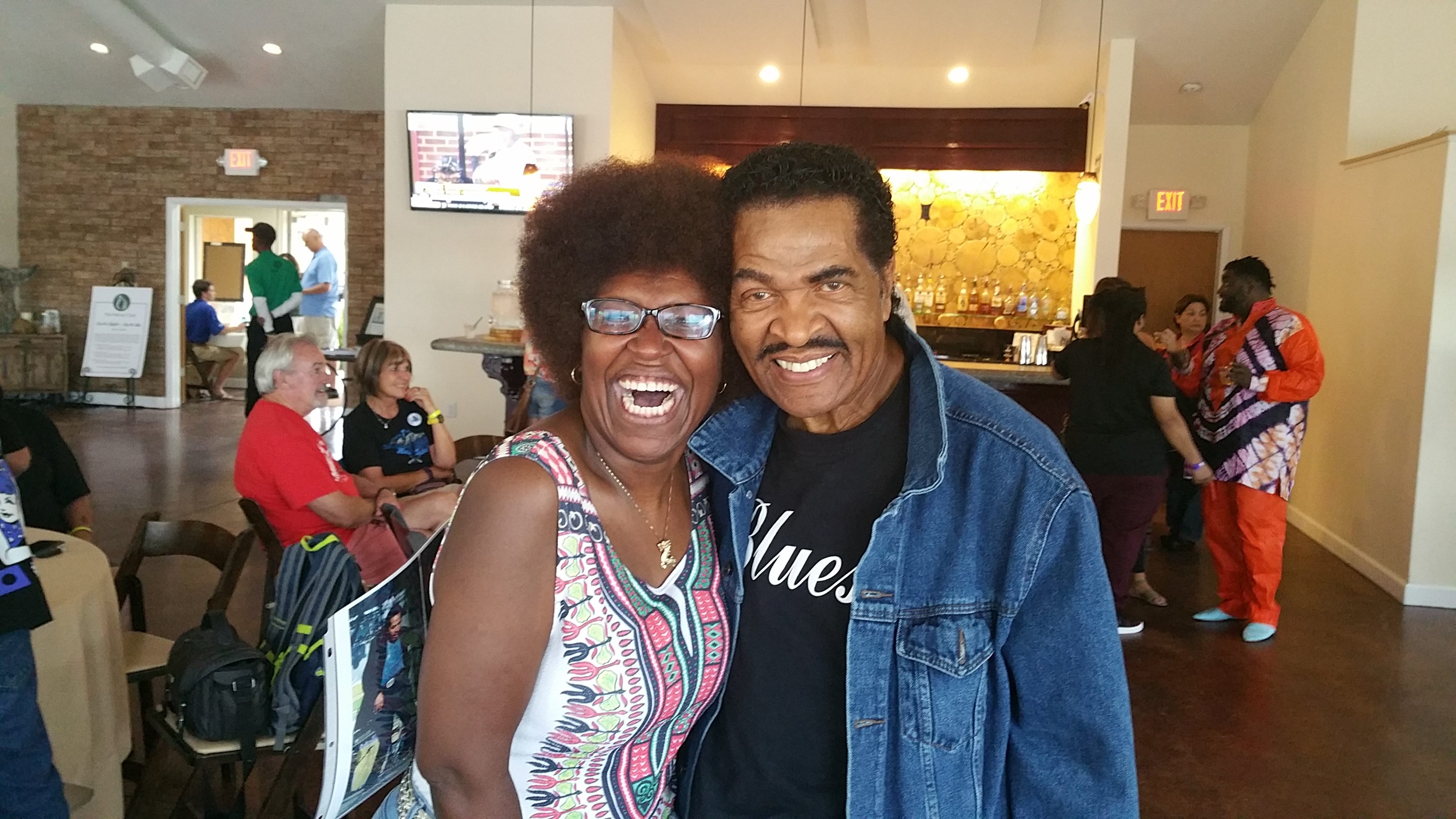 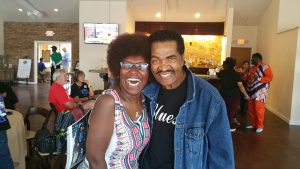 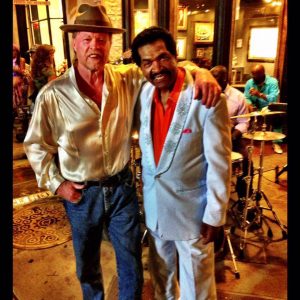 Erica was contacted by Grammy-nominated Bluesman Carl Gustafson, (Blinddog Smokin’ Blues Band) and was asked to contribute vocals to a project he was producing, along with 2017 and 2021 Grammy Winner in Traditional Blues, Blues Man Bobby Rush.  That project has blossomed into the epic music novel “Rush Through History”, the story of Rush’s family, the Ellis Family. Along with Rush on harmonica, other musicians on the project include Blues Woman Teeny Tucker (daughter of Tommy Tucker, writer of the 1963 Hit “Hi Heel Sneakers”), Ms. Tata Vega (the “musical voice” of the character “Shug” in the movie The Color Purple), gospel vocalist Linda McCrary, vocalist Natalie Cadet, famed gospel, rock, blues, jazz and funk B-3 organist Cory Henry, along with Mississippi Hill Country blues (and sons of R.L. Burnside) brothers Gary and Duwayne Burnside, Blues Guitar master Lightnin’ Malcolm, African Folklorist and master Djembe player Weedie Braimah, Cuban drummer Pedrito Martinez, and guitarist George Dez.   For more information on the project, go here:  https://www.facebook.com/Rush-Through-History-610241262506160/ 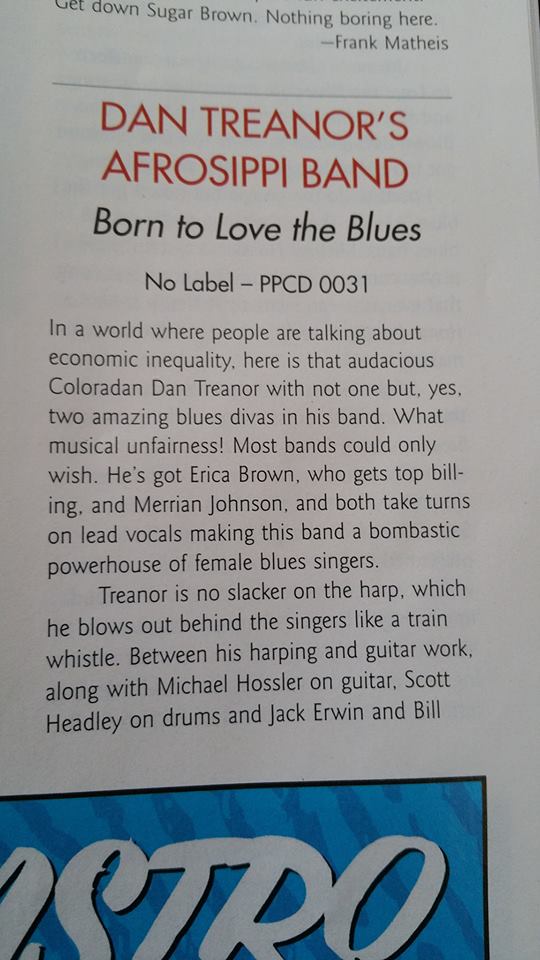 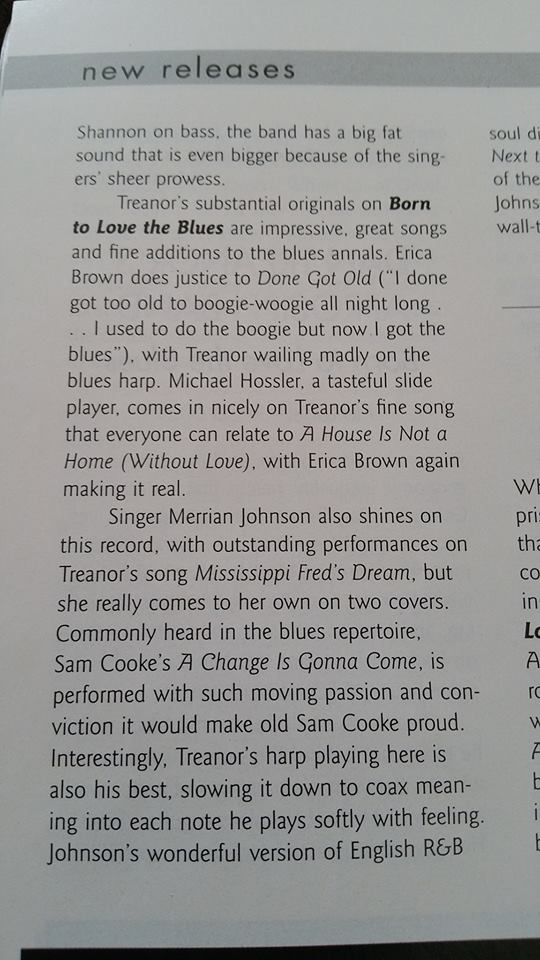 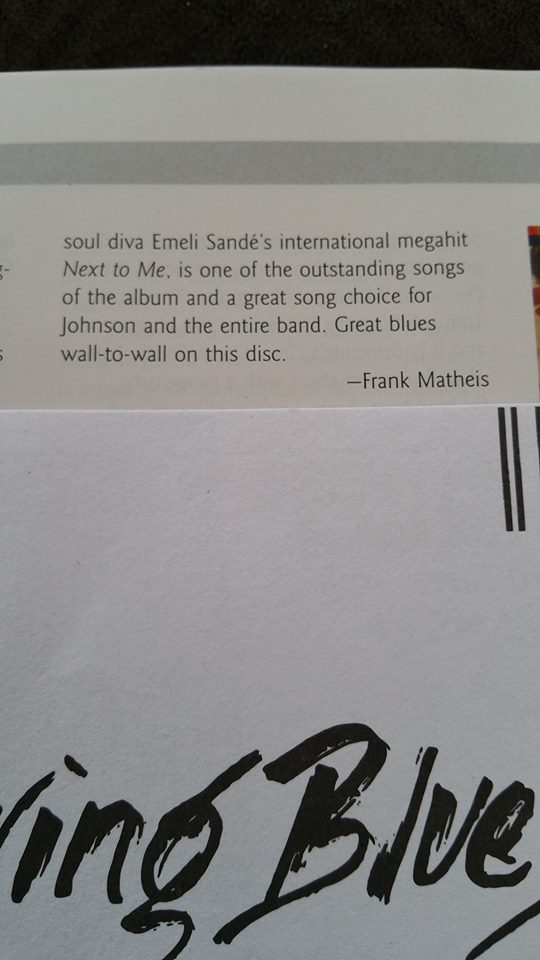 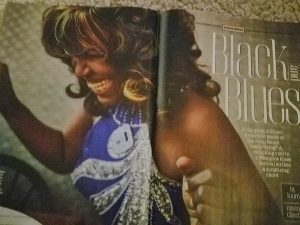 In January 2016, Erica attended and Co-Emceed the National Women in Blues Celebration in Memphis, TN as a part of the Blues Foundation’s International Blues Challenge Week. While there, superstar photographer Danny Clinch (along with Journalist Toure’) was photographing the event for a Smithsonian Magazine article on the Blues, and asked Erica if he could take her photo.  She agreed, and out of that short photo session, one of those photos has emerged as the two-page splash for the September 2016 article, “Black and Blues” as part of the Black In America series, written by Toure’.  We send our thanks to Michele Seidman, CEO of National Women In Blues for the opportunity to be a part of the celebration, Danny Clinch for the stunning photo, Toure’ for the wonderful article, and of course, Smithsonian Magazine! 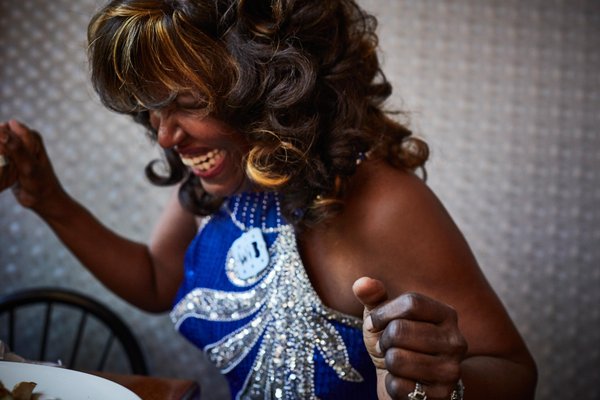 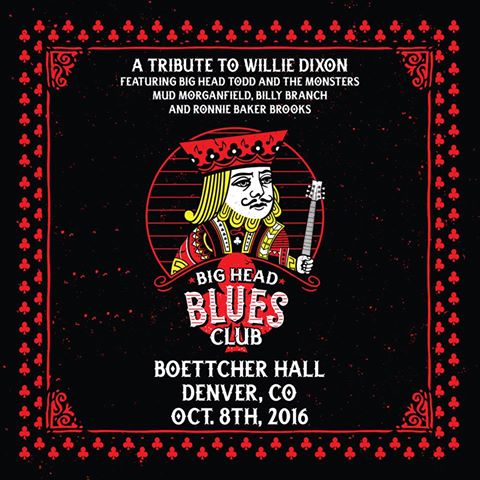 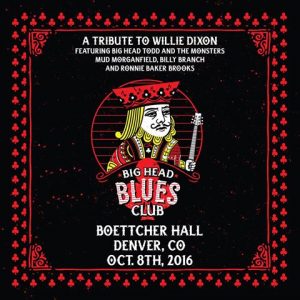 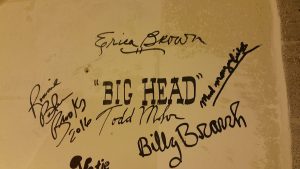 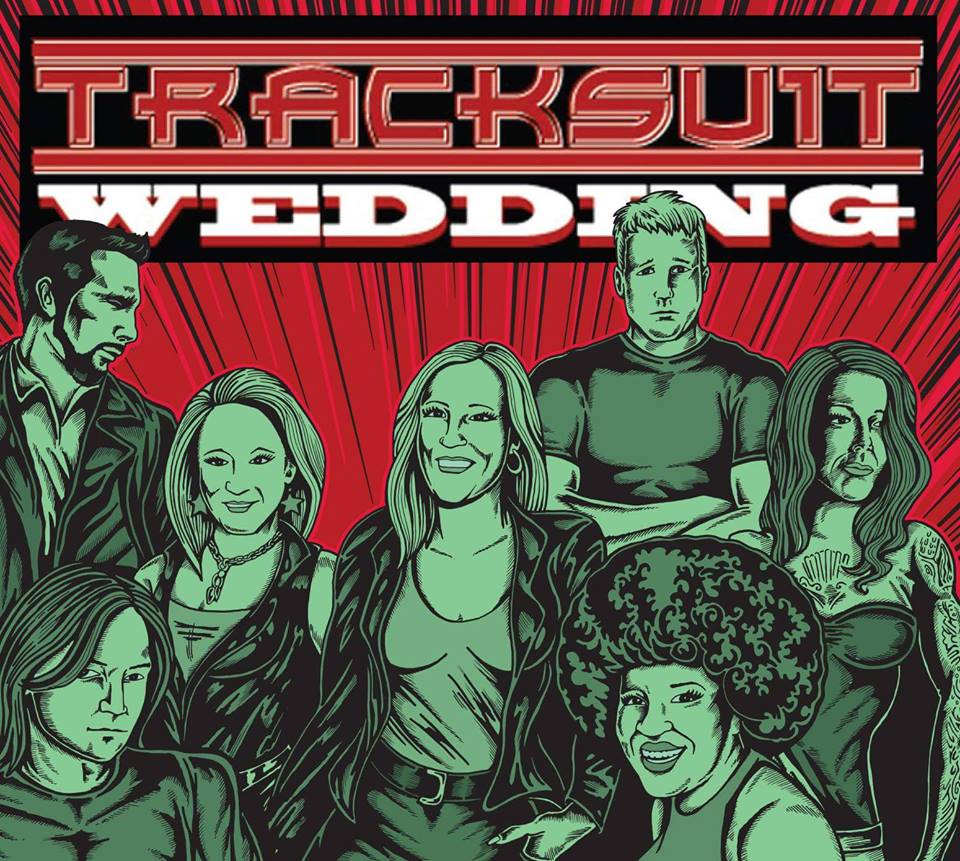 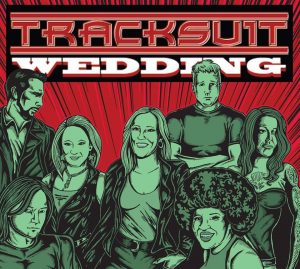