photo courtesy Mark Stout, with Ronnie Baker Brooks on the left, and Mud Morgan field on the right.
Click for higher resolution 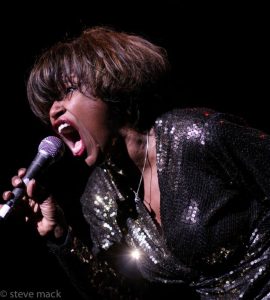 rica Brown has been singin’ the Blues all her life, from her Baptist choir upbringing, and working in the cotton fields (yes, she really did), she’s seen and lived the blues. From those beginnings, she has continued to share her gift with the world, and publications like Living Blues in the US, and Blues Matters in the UK sing her praises. She’s performed with Muddy’s son Big Bill Morganfield, as well as Texas roadhouse rocker and four time Grammy winner Delbert McClinton, and been mentored by none other than Oklahoma Hall of Famer Miss Blues.
When the smoke cleared, she was the only female in the 9 bands competing in the 2013 International Blues Challenge Finals, and, with Dan Treanor’s Afrosippi Band, featuring her, came in 3rd Place in the 2013 International Blues Challenge.
She’s seen and lived a lot, but she’s still writing her story.
She’s Colorado’s Queen of the Blues, Miss Erica Brown.

Posted by Big Head Todd and the Monsters on Saturday, September 24, 2016