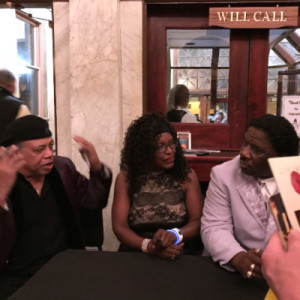 Every so often Todd Parks Mohr, frontman for Big Head Todd and the Monsters, breaks free from his music to celebrate legends. I had the good fortune to see him and his band team up with some remarkable musicians, Mud Morganfield (Muddy Waters son), Billy Branch, Ronnie Baker Brooks, and Erica Brown (who joined the group as their backup singer and power house), to sing songs from Willie Dixon.

One of the remarkable things about this concert was its venue, a small renovated theater, something out of the Vaudevillian days, in downtown Red Wing, Minnesota. Red Wing is a small Mississippi river town that I’m sure no one outside of Minnesota would have hear of, but regardless, it was perfect for an intimate night with Todd and his friends.

As always, I’m very easily “blown away” by live music, not just any live music, but music of soul shaking proportions, and this was surely a night to remember.

Erica Brown only came out twice, which was a shame, because she had some “pipes” in her, holy god…..it was living the Maxell tap commercial, fantastic.

The rest of the boys shared the spotlight singing their renditions of Willie’s master pieces, but what was surprising to me, though maybe not to you, was “You need Love” which Mud sang….Led Zeppelin has also covered it pretty famously.

One of the highlights was the up close and personal moment each singer spoke about, their introduction to the blues, meeting Willie, and how the Blues changed their lives. Mud spoke of his father Muddy and the day Prince showed up in a long Limousine, or Todd’s first meeting with Ronnie Baker Brown 20 yrs ago. Paul and I have followed Big Head Todd since their debut album back in the 80’s. They remain one of our favorite bands to see live, showing us music is timeless, and uniting.